What is Farley’s Fund:

Farley fund is a 501(c)3 nonprofit organization that was set up to financially assist pet owners and rescue groups who are financially unable to continue treatment on their own. We will, to the best of our ability, do everything possible to help all animals with a good prognosis for a healthy life.

Beginning with a small Facebook post, Farley’s journey was a whirlwind of hope and perseverance. On April 17, 2014, an urgent plea was posted on Facebook asking if there was anyone we knew who could help a dog who was taking up residency in a Kansas City shelter. The shelter did everything they could to find him a home, but without immediate care, the dog would have to be put to sleep. Farley was in terrible shape and unfortunately had no use of his back legs. Kansas City, being 4 hours away, seemed a little out of our range and we were unsure as to how we would be able to assist Farley. If Farley was here, we would undoubtedly get him help! When two generous women, the ones who gave the name Farley, volunteered their time to drive him to us, we were surprised but apprehensive about what would be showing up at our door.

When Farley arrived 13 days later, he was a brown ball of happiness. His coat looked rough and he was thin as a rail, but his tongue was still lolling out and his eyes shined. Anyone who came into contact with Farley immediately fell in love. This dog had been dealt a very rough hand but continued to face every day with courage.

Upon first examination, we believed Farley could be helped. Pacific Animal Hospital, where Farley became a crowd favorite and resident, began treatment for a possible spinal cord injury. He spent his days lounging with the staff and greeting the clients as they entered the building. Doing some research, we learned of an organization called The Rolling Dog Project. We reached out to them and they agreed to create a custom built, made to fit, wheel chair just for Farley. We thought he was happy when he arrived, but it was nothing compared to how he was when he ran around in his chair. Since he still had full use of his front legs, he was able to pull himself around and be more like a normal dog. For further treatment, he was taken to a chiropractor for pain and rehab therapy as well as acupuncture. As much as he didn’t like it, he was also submitted to swim therapy where he was known to move his back legs. When winter came, therapy continued and a pool was even placed indoors for his benefit. However, a slow decline was being noticed. Soon, Farley needed assistance when walking in his chair. His front legs grew weaker and we knew it was just a matter of time before the nasty disease would take over his brain stem and eventually his life. The sparkle in his eyes slowly faded but the amount of lives he touched never stopped growing. 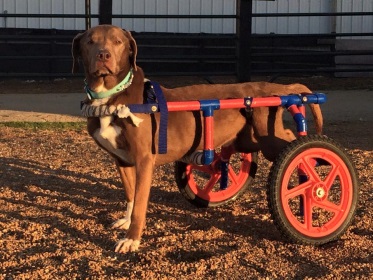 Despite our best efforts, on May 29, 2015, just over a year after his arrival, Farley passed away. While he is physically no longer with us, his spirit lives on in the hearts of all he met. Looking back now, Farley had the best year of his life. He was happy despite his many disadvantages and became a symbol of hope as he refused to give up on his life. Farley’s Fund was formed to spread that spirit which he instilled into each and every one of us. There will never be another Farley, but there will always be animals and families in need. Farley’s Fund will work to ensure that no animal, which has a good chance of reaching a healthier life, nor family--who is at a loss in their time of need--is turned away from veterinary care.